What is known is not known...

I've been working up a voice for the opening of DP, In The Beginning. Very much 3rd person omniscient while keeping the comments and questions in my main character's mind as simplistic as possible. I have a feeling I'll be making up a shitload of stuff regarding the story, because historians in Ireland are consistently trying to change what is and was considered fact about the island's history.

Like how the Irish aren't really Celts. I'm just now digging into this idea and not finding too damn much past the one discovery of three sets of adult bones in an ancient grave on Rathlin Island, off the coast of Co. Antrim. There's a fairly detailed story in the Washington Post from 4 years ago that notes these bones share DNA with today's Irish but predate when the Celts were thought to have arrived to inhabit the island by a thousand years. Older bones found share nothing with them but appear to be more Mediterranean in origin, so everyone's in a tizzy. Five-hundred years of linking the Celts to the Irish is close to being tossed out the window.

What doesn't make sense to me is, haven't bones found during the known Celtic time had their DNA checked to see if they corresponded to that of the modern Irish? I'm having little luck finding out anything about that.

But it doesn't really matter. Everything about that time period is pretty much conjecture so I could probably fake up a good history and societal workup to suit me. People will quibble, but they will anyway so why worry about it? So long as I don't get too ridiculously outlandish. After all, there's little real evidence the Tuatha d'annan even existed except as another group of invaders out to make Ireland their home. Not necessarily part and parcel with The Dagda and Morriggan and the mysteries surrounding them. 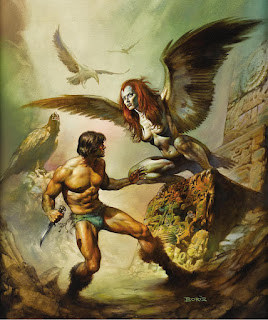 I'm also planning to make the harpies more human-like than this rendition offered by Boris. It's important to the whole of the story, and something is working in to make the creatures more understandable, lonely even, if still terrifying and evil.

It's my hope to make this seem real, no matter what. Same for the center story, set in 1910. That has an immigrant Irishman marrying a wealthy woman in very strictly class-oriented Boston then bringing her home to meet mother as they try to figure out if their marriage was really a huge mistake. It won't be easy, either.

The last section, the modern part, will be easiest. The fun I'm having there is showing how far off the mark the researchers are about what happened to start the whole issue.

It's always more fun to write when you can play...