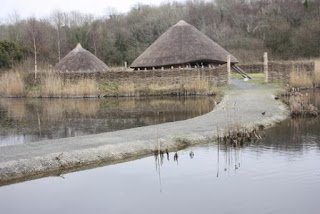 I've been in an odd mood the last few days. No writing done, just research...and I've seen I have a lot of rewriting to do if I want the first part of Darian's Point to happen 3500 years ago and not 6000. For example, crannogs like this one were being used much earlier than I'd thought...which is one of the reasons I wanted to actually visit on in Ireland and view for myself. I think this jolted the story in my head and I'm having to realign everything before I can continue.

It's also the end of 2020 and I am so damned glad. In 20 days, if all goes according to plan, Biden will be president and that orange beast will be gone. No guarantees, yet. I don't put it past him to pull some shit that throws everything into chaos. He thrives on that. Lives for it, like some maniacal James Bond villain. "I will rule the world or I will destroy it!"

Anyway...I haven't been able to focus on anything. Just been drifting like a raft on the Mississippi. Preparing for the end of unemployment benefits because the GOP is filled with craven hypocrites who put the rich over everyone else, and Democrats are proving over and over they're too cowardly to fight them. I'm at a point, fortunately, where I can survive, as is, for a year.

I have plenty of available credit to cover my rent, food and other necessities. I'll have a steady income from Social Security. Not enough to live on but a bit of a cushion. I'll end the year in a lot more debt, but I can deal with that, then. Right now, it's about survival.

And hoping 2021 will be an improvement on this last one.