My crankiness is now past, and I've pulled together everything I have on Darian's Point and its sequel, Return to Darian's Point. I shifted them into RTF files so I can open them in Word, and I also found an outline for the beginning of the story, set 3000 years ago. 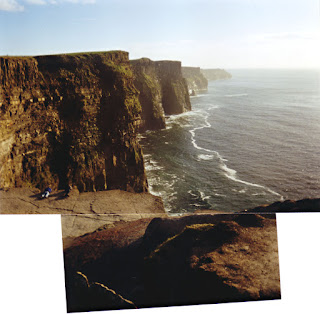 Outline for Darian’s Point, the Beginning

Open With Kevan Ui Briain and his men crossing the sea in small boats to meet Morriggan and The Dagda (father of the ancient Celtic gods) at Darian’s Point, a peninsula on Inish Ciuin, a small island near the Cliffs of Moher. The men are battle-scarred and angry. They have come to offer one of their own as a sacrifice. Kevin declares himself to be the one. Morriggan is not pleased; nor is the Dagda, but they have to accept. A mist builds, blocking out everything, then three creatures swoop in and Kevan is killed as he begs forgiveness from Caera.

5 years earlier, Kevan and Caera talk of wedding, she’s gathering reeds. Playful. The Dagda passes, a blond elegant man of the Tuatha d'annan. He sees her. Talk. He won’t make it home and a storm coming. She offers shelter; good manners.

Dagda given shelter for night in compound. He flirts with Caera. She reciprocates. Kevan is jealous. Father tells him to cool it, the man is a guest. Kevan storms off. Caera angry with him, talked into sex by Dagda.

Seagull sees and goes to tell Morriggan. Furious, she casts runes to find the one closest to Caera, and it’s Kevan. Morriggan finds him atop the Cliffs of Moher and seduces him. She becomes pregnant by him and has a daughter.

Caera winds up pregnant. Everyone thinks it’s Kevan’s, but he denies it. Forced to marry, but he will not sleep with her. “Dream of your god-man.” Caera has a boy. Midwife whispers, “Born with hair the color of moonbeams and eyes as blue as the sky. Eyes already open.” Everyone now knows the child is not of their bloodline.

Caera admits baby is the Dagda’s. That Kevan has never been with her. Kevan refuses the child and Caera. His father takes on their responsibility, angry with Kevan for his unwillingness to accept human weakness. Hopes he doesn’t regret it.

Seagull hears and reports it to Morriggan. She confronts the Dagda, vicious argument. No longer a secret that can be kept. She's more upset at him screwing a lowlife woman than at pregnancy. He throws her own infidelity in her face, which pisses her off more.

Morriggan's child arrives and takes after Kevan; She refuses to accept her but the Dagda won’t let her give her away. Morriggan casts runes to learn her daughter and Caera’s son will wed and bear a son, who will bear a son...and their blood will be cursed till the death of the last Ui'Briain.

Morriggan does not tell the Dagda his child is male. She calls her adult daughters. They cast runes to find Caera to kill her and the boy, to prevent the prophecy. Caera kept apart from other women. Surrounded by a mist. 4 figures appear -- 3 of them Morrigan’s daughters as Morriggan cuts her throat. Baby’s not with her.

Kevan accused but has alibi; hunting with brother and father. En route back with kill when heard. He is beside himself with grief. Witness tells of the mist surrounding Caera for a moment. “That’s how the Tuatha d’annan came to island.”

Kevan, father and men go to Tara and confront The Dagda. “She had my son?” Morriggan is furious that he knows. “So what if the child was a boy?” The Dagda realizes what Morriggan has done. “If you touch him, you are dead.” She reminds him he coerced a mere woman into sex. Not exactly innocent.

The Dagda acknowledges he did wrong and renounces Morriggan as his wife. He washes sins away in the surf off the Cliffs of Moher.

Morriggan snarls about the hypocrisy of men and their attitude towards women. Forms The Dagda’s sins into 7 harpies, forbids them to ever harm a female, and sets them loose on the land. Kill every male child you find (hoping to get Caera’s boy). Daughters help her.

Slaughters occur. Kevan and Father build army to fight the creatures. Track them down, kill 3 of them, but at great cost. Even Morriggan is horrified by what she has started, but harpies are not controlled by her. They're viciously upset, “Why no man for us?” Plan to keep killing.

Morriggan joins with The Dagda to force a compromise by helping kill another harpy. This finally convinces the creatures to back down or will be annihilated. Live in the Cliffs, safe from men. Come out during storms and feed on fish in the sea, but every hundred years a young man of the Ui Briain clan is to be offered in sacrifice to them.

Morriggan knows the saying is now fulfilled and is devastated by it.

Book Two takes place in 1910, and Book Three, which finalizes the prophecy with the last death of the last Ui Briain, is set in modern times.