Research, thy name is pain in the ass...

I was in the office most of the day after spending the last three days on the road, and have to call a client tomorrow to talk about a job in Houston, next month, as well as one in Santa Fe. So it looks like my work is beginning to pick up. Maybe I won't go bankrupt, after all. 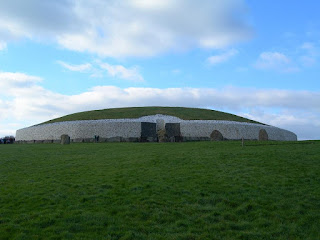 But I have been doing research for Darian's Point, delving into what is currently known and thought to be known about Ireland's ancient history. Mainly the Fir Bolg, Milesians and Tuatha d'annan as well as neolithic Bru na Boinne, out in Newgrange up near the border with Northern Ireland.

I've been to that, but it was some time ago. It's a megalithic passage grave that predates the pyramids (built around 3300 BC) and has an entrance aligned with the sun at the winter solstice. Pretty amazing. I was planning to make a return trip when everything got canceled.

Of course, when I hit Houston I'll be shifting my research mode to Book 2 of APoS, to dig into that better when I'm ready to return to it. I lived in Houston between 1985 and 1993, then moved to LA. So I don't really know a lot about the city during the 70s. I'm hoping to find something usable at the library, if it's open.

But, hey, that's what research is for, right?