Tomorrow I'm off to Philadelphia and then New York and then New Haven, so today I spent letting my mind drift while loading a couple of CDs into my laptop for the road trip. I love Depeche Mode's 101 Live album, and also have Yanni's Ultimate album (don't judge me!) along with the score for the movie Topsy Turvy. These are my road tunes, but they don't play well on a player while driving, so I'm trying it digital. Fire up the laptop and listen.

If it works well, I'll load in a few more. Probably some electronica, tho' I also like the German industrial techno sounds of the 90s. I listen to Brave New Rave on KCRW.com once it's posted online. It's a program on KCRW-Berlin that plays on Thursday nights then is uploaded to their site so you can listen to it at any time. 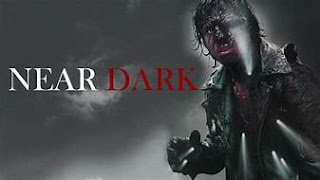 I also joined with some fellow writers on Facebook for a movie night -- Near Dark. A classic horror film about cowboy vampires, with some truly chilling scenes. I haven't seen in it years...and years...and apparently I was less discerning about good follow-through in filmmaking back then.

Aside from the poor streaming from Amazon Prime (!) that kept stopping and hiccuping and dragging, here and there, I got the feeling some moments had been cut out of this copy. It felt like shots were missing and the ending bit with the vampires was shortened...but they may just never have been there, to begin with; I'm just noticing them now...

Of course, I never bought the ending. It was completely dishonest, but the script was written by Eric Red and Kathryn Bigelow (more him than her, I'm sure, considering his screenplay for The Hitcher) and was minimalist to a fault. But Bill Paxton out of control? Adrian Pasdar being prettier than Jenny Wright? Lance Henriksen and Jeanette Goldstein as the papa and momma of the crew? And that bar scene, with cute, terrified James Le Gros being left alive for Adrian to chase and feed upon?

Still worked for me.