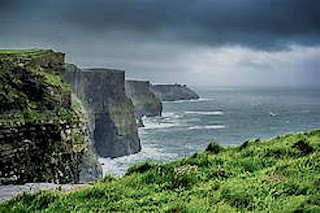 I'd intended to write Darian's Point in a linear fashion, but today I chucked that idea out and started the moment when Caoimhín and Morrigan meet atop the Cliffs of Moher and, seemingly, commiserate over betrayals by their respective loves.

He feels Caera has chucked him over for The Dagda, and sees himself as extremely inadequate in comparison to the man; Morrigan is furious at The Dagda for going after a girl of the Fir Bolg, people they had bested in battle.

I'm trying to keep it subtle, here, so it leads naturally into the two of them having sex...and him staying with her for a couple days. By the time he gets back to the settlement, Caera is furious and their rift threatens to grow wider...but they make amends...until Caera realizes she is pregnant with The Dagda's child. That's when things explode.

I did over 1400 words, but it took me hours to work myself into them. One good thing I'm finding is, writing a story set 3500 years ago takes me away from the catastrophe that's going on in this country, thanks to the GOP. I am actually wishing death on certain Republicans, something I hate to even think. But it's real.

I don't hold the Democrats blameless. They let things get to this point with damn near nothing in the way of pushback. Right now, I'm glad I can stay in my room and not face the world; it's getting to be scary out there.

I was going to have a job to do in Santa Fe, but New Mexico has posted they want everyone flying into the state to stay in quarantine for 14 days, with few exceptions. That won't work, so we've postponed it. It'll be bad enough dealing with Houston. I'll need a Covid test before I return and one after I'm back, within 4 days. That or it's quarantine...which I may go for, this time.
I wonder if I'm becoming agoraphobic?