I did a bit of a jump in writing Darian's point and worked up a sex scene between my MC and Morrigan, who according to Irish mythology is either a goddess or the Queen of the Banshees. It's revenge sex for the both of them, and it gets pretty heated. Here's part of the lead up to it...I'll post more, tomorrow... 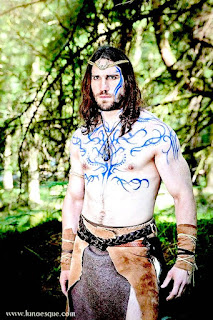 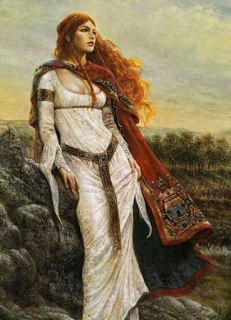 The voice jolted him. Came from behind. Instinct drove him to crouch and spin and have his sword ready in hand, ready for any attack. But it had been a soft voice. A woman's. And he saw her, instantly.
She was as tall as he, with hair like fire being whipped in the breeze. Her eyes the color of the grass. Her skin like milk. Her form the vision of a dream. She wore a dress made of some material he did not understand. It was the color of sand and trimmed in the finest gold, and was lighter than that of The Dagda. It caught the light of the sun and held it within as it clung so gently to her...in all the right places. Her breasts. Her hips. Her legs. Her cloak, as dark as the earth, was rich and warm and regal in its beauty, but she did not hold it tight to herself. It was as if the cold did not cause her discomfort.
She gazed upon him, almost amused.
"You would attack me?" she asked, her voice hinting at mockery. "I have no weapon...well, except for this."
She held up a silver dagger, gleaming in the sunlight.
"It would be of little use against your mighty sword," she continued, her tone gentle yet with a hint of mockery.
Caoimhín rose to stand straight, facing her. The wind continued to pull at him.
"You surprised me," he said. "Where did you come from?"
"Over there," she said, smiling as her right hand motioned vaguely behind her.
He huffed, keeping his sword at the ready. "That is our land. You are Tuatha d'annan."
She gave a soft chuckle. "I am Morrigan."
He nodded, wary. "You, I have heard of."
"And you are?"
"Caoimhín, of the clan Ui Briúin."
"Ah, and you...I have heard of."
He snorted. "I don't see why. Your sort pay little attention to us."
"Not always."
"All right, except when you want something. Then you are close and caring. One of you is with us, now."
Her smile became both haughty and amused. "And is he wanting something?"
Caoimhín growled, the peace of a moment ago now long gone. He started to walk away.
"Where are you going?" she continued.
"Home."
"Why? Have you some reason to be there?"
He glared at her. "Why would I stay here?"
"You were happy a moment ago. I heard it in your voice. I like to see young men who are happy. It's so rare to find."
He hesitated. "I have duties..."
"And yet, you are here."
"As are you."
"I have nowhere else to be."
He eyed her, careful. More than wary. "I hear you are The Dagda's mate."
Her expression grew haughty and cold. "I am no man's mate." She spit the word out. "I am Morrigan. I am a Queen!"
Caoimhín sneered as he backed away, down the hillside. "Well, your King is with us, now."
"No longer," she all but murmured. "He got what he wanted."
He froze.