I'm going through my usual withdrawal state of being cranky and unfocused, now that I've done a full semi-decent draft of APoS. I'm not coasting to a stop, as I'd like; I'm sort of spitting and moaning and wondering if I should park here or there or look for a better space to sit my ass down. Which means I'm getting nothing done.

So today I drove out to Niagara Falls Community College to have another Covid test, to satisfy the state, then stopped at Niagara Falls to see how it looked after a fairly decent snow storm. I guess the snow didn't hit there as hard as it did in my area; I live about 15 miles south of the Falls. 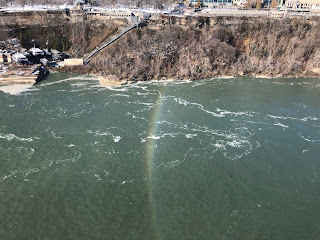 Damn, it was cold thanks to a steady wind. But I caught a rainbow from the end of the observation deck. I took video of another one I saw, earlier, and posted it my Facebook page; it shows the deck in the background for part of it.

The spray from the Falls does it, and they don't last long as you can see in the video. I caught only the tail end of the one in the photo before it disappeared, but it reminded me of the time I was on Inisheer, the smallest of the Aran Islands off the coast of Ireland, and I caught one over the North Atlantic Ocean.

I was on a hilltop next to the ruins of a small chapel that had just been dug out from under layers of sand. Over the winter, the storms fill the church's space with sand and seaweed and it's cleared out every Spring. I was there in late March, as they were nearing completion. 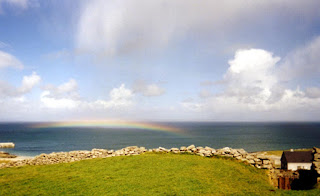 It's a reminder of my other Irish story, Darian's Point. I'd gone to Inisheer to get a feel for a small island located under the Cliffs of Moher, and the damn cliffs were barely visible over the ocean. Not at all intimidating, like I'd planned...but worthwhile enough to show me the way to make the story work.

It's in screenplay form, as is a sequel I worked up that damn near got sold. Director wanted it. Producer wanted it. I wanted it. But the man who signed the checks already had an Irish film in production and didn't want another, so said No.

Fucking luck of the Irish.

My next step is to write it into book form. Another 3-part story -- the beginning, which starts in ancient times; the middle, which happens in 1910; and the end, which occurs in modern day. Only the last two are fully written, and I am very proud of them; as screenplays, Darian's Point damn near got me a Nicholl Fellowship and both it and Return to Darian's Point have won awards. I know what needs to go into the beginning; it's just buckling down to write it. I was going to visit Cragganouwen, a lake dwelling that would factor into the story, but Covid scuttled that trip to Ireland.