The last three days I've been working on book 3 of A Place of Safety, when Brendan returns to Derry in April, 1981, while the hunger strikes are underway. All hell is tearing loose, despite the peace movement, and he's dealing with his mother dying of cancer and having to keep a low profile because he snuck into the country using a friend's name and passport. Naturally, it doesn't quite work out. 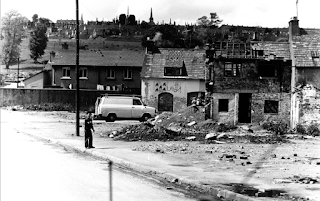 I really need to reread the first two parts to remind myself of what has and hasn't happened, and what may need to be added in, thanks to how things are going in this book. There's a lot to digest and discuss, and having it told in first person means no omniscient author to explain it all. It has to be from Brendan's perspective, consistently.

That could be a limitation in deepening the book and its meaning, but that's how Brendan wants it. I discussed shifting to third person, with him, and he was adamant it be his story and his alone, with others there to provide background and life. And so it is. I'm now pushing to find a style for him to tell the story in a way that provides more than just his limited perceptions.

Okay, they actually aren't limited; just not as complex as I'd like for this. While Brendan didn't finish high school...he has no formal education much past his 16th birthday...he's not stupid. And while I have to be careful not to make him too erudite, he's read books and newspapers and letters from his sister in Toronto and been around educated people, so at least a little of that would have rubbed off on him and his vocabulary. It's finding the balance that will be the problem.

But never let it be said I wrote easy books...