I'm finding what I've written for A Place of Safety is extremely simplistic and shallow. I glide past serious moments with the barest of emotional connection, which isn't really bad. I know I'll be reworking the whole set of books over and over and over until they begin to take shape. Until I find a way to delve into their meaning. 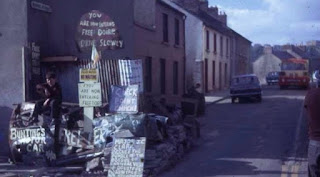 While on the train coming home, last night, I realized that there are moments in this I'm not paying full attention to. For example, in Derry, Brendan's brother-in-law, Terry, is grabbed during internment, as is Brendan. Terry is brutalized by the British in their methods of torture, trying to prove he's IRA. He isn't, but that's immaterial. Brendan is let go fairly quickly because he looks so much younger than 15 years old.

When Terry's freed, he has little more reaction to what happened than, "We're leaving this country." He wants to take his wife, Mairead (Brendan's older sister) and their kids to Canada...and it just sort of happens. No emotional charge to it.

But...if he's brought out nearly broken and Mairead has to make decisions, that changes the whole dynamic. She does all she can to help her husband heal. And when her older brother, Eamonn, barges into her decisions and argues against them leaving, she kicks him out of their flat. Becomes a lot more interesting.

It's the same with Derry '81. I'm skating through some very intense moments just to get to the end. Next pass will be to find ways of making everything more dangerous and true.