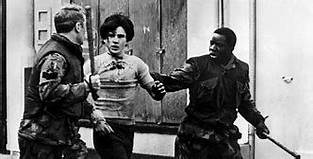 And I'm still going. Still finding spots where the characters want to interact and add to the story. This part is proving tough because events are coming together where Brendan has to take a stand, something he's never wanted to do. He's always preferred to just be left alone to live his life...but that's not an option in this world or any other.
I'm fighting my old screenwriter habits, here, because they want to have certain moments happen at certain times, and that form also has certain scenes that are absolutely obligatory...but it doesn't work for this book. The entire thing is told through Brendan's perspective and his actions and events he lives. Nothing else matters. Just his experiences and what he thinks of them. And as much as the screenwriter in me wants that obligatory scene...and I know which one it is because I've cut it...it does not work.
But the damn thing is still trying to finagle its way back in, suggesting possibilities that are completely incorrect for the times and situations. And I hate films that don't pay attention to the reality they are in, even if it's a fantasy world...and APoS is not fantasy.
For example, I like Hitchcock's films, but that man is perfectly willing to ignore any laws of reality or timeline or even what's said earlier in the story in order to build his suspense. Take North by Northwest and the crop-duster scene. It's a classic piece of work in film history...but the ending of it, when the plane crashes into the oil truck? Completely ignores the laws of physics just so Hitch can have a shot of Cary Grant rushing away from the burning wreckage.

He did something similar during a plane wreck in Foreign Correspondent. As the plane's heading down to the ocean, the passengers fight to get to the back of it because the nose will hit the water, first. Um, centrifugal force will slam them all back to the nose, once the plane hits...but that gets ignored.

There are lots of films like that. I absolutely despised The Rock because it paid zero attention to how things would really work in order to have the script keep going. And wasn't Keanu Reeves in one where he outraced a nuclear explosion on a motorbike? Drives me crazy, because it's lazy, sloppy writing. I don't want anything like that in APoS.

Guess that makes me a truth freak...