I'm jumping back and forth in APoS tying up inconsistencies and adding bits. I've got one section done the way I want it in Derry '81. Brendan was almost found out by British soldiers who stopped him, but he was able to talk his way out of it. However, they're suspicious and now know where he's staying and keeping watch on the place, so he's sent word to an old friend who's IRA, seeking help. 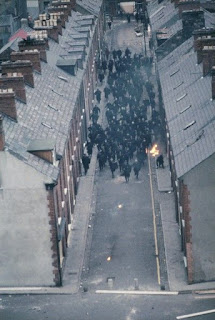