Showing posts from April, 2020
Show all

Working on a new book...

April 30, 2020
To clear my brain so I can come back to the first rough draft of APoS , I'm adapting one of my screenplays into book form...and finding the script was crap. It's called Dair's Window and is about Adair Llewellyn, a stained glass artist from a small town in the Cascade Mountains of Washington State. He's trying to get his life back on track after the death of his lover, Adam, and suffering through years of lawsuits by the man's estranged family, who insisted Adam was responsible for Dair's growing fame and increase in financial worth. But now the lawsuits have been dismissed, thanks to Adam's family having disowned him when he came out, and Dair just wants his life to get back to normal. He's getting married to the lawyer who took over his case after his first lawyer died, and he's moving home, again, after being forced to stay away by court order. But things are different, and people in town aren't happy about two men getting married, and the
Post a Comment
Read more

Other books, dark and scary... 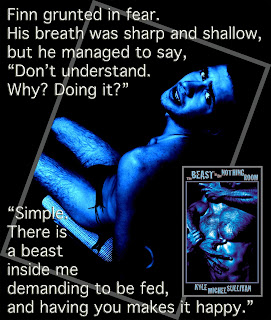 FWIW, I've written a number of other books that are dark and filled with sex and violence. My latest, The Beast in the Nothing Room , is SF-Horror-Suspense with romance thrown in and is getting good reviews. So if you're not faint on heart, this one shows just how deranged I can be when writing. http://www.kimmerseroticbookbanter.com/2020/02/25/review-the-beast-in-the-nothing-room-by-kyle-michel-sullivan/ It's available in ebook at Smashwords only. Amazon will only carry it in paperback. It's my hope to make APoS as intense as this without veering into depravity...
Post a Comment
Read more
More posts