Back to the beginning

January 01, 2020
I've spent the last two months focused on finishing another of my MM horror books, and it's now uploaded to both Smashwords (and available in ebook) and Ingram Spark (waiting on a proof and print copy to make sure it's all okay). The Beast in the Nothing Room is one of my dark stories but built around multi-dimensional human characters, each with his own arc. There is some very violent sex in it and the premise says it all -- How can you stop a serial killer who never kills anyone and doesn't even exist? 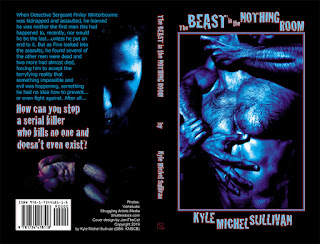 It's a rip on HG Wells' Time Machine taken to a logical extreme -- What if a psychopath from the future went back in time to rape men just before they were slated to die? It's no crime to brutalize someone who's already dead, nor is it murder. If I changed the concept to that of a Jack-the-ripper type coming back to kill prostitutes, I could probably sell the damn thing for a million bucks. Make the hero female...or male with a female partner targeted. Be practical.

So...now I return focus to A Place of Safety. And happily so. I got a lot of backed up anger and attitude out in BNR and it showed me something I was missing in the middle section -- Brendan's not really reacting to the horror he's seen and experienced. And the people who wind up surrounding him can help illuminate that and show it's universal.

He becomes involved with an older woman at the bar where he works under the table; he makes friends with a Jewish guy his own basic age (who was caught in the Yom Kippur war and senses Brendan is the only other person he knows who's seen violent death); and gets to know a semi-closted gay man who's 10 years older and been gay-bashed. He even builds a love for a young woman who's of mixed race, and whose brothers are treated like automatic criminals no matter how careful they are in their behavior. Hell, in the 70s there was a race riot in Memorial Park and white cops murdered a Latino man by throwing him into Buffalo Bayou while he was still handcuffed. And let's not forget, Deer Park and Pasadena, Houston's eastern suburbs, had the largest chapter of the KKK in the US.

The story here isn't boring; I was just being too polite and wary to tell it, and pretending it was a drive to genteel literal writing instead of just plain cowardice.