September 24, 2019
I breeched another section of the book that was causing me serious agita. This is in Houston, and it's a fairly substantial link that needed writing. Brendan's rebuilding his life and has put together a new family, not just with his Aunt, Uncle and cousins but co-workers and people he's met. One is a part-time waitress at a bar he works for. She reads a lot of SF by female authors like Andre Norton, Octavia Butler and Ursula LeGuin, and he finds he likes one of the books she gives him.

They wind up as lovers, even though she's older than him by a good ten years, but he feels comfortable with her because she's also solitary in her ways. Turns out it's because she's trying to keep hidden from her husband, but the guy shows up, things explode and Brendan's new family all but disintegrates around him.

My consistent whine about this is, it's all so superficial. I'm skating over the incidents with near-cliched actions and words in order to keep going, and no matter what I say to myself about it just being to get something written that I can then rewrite into perfection, I hate my voice, right now.

I know it's really Brendan's voice, and he's doing what he can to keep it from being all ABC in the dramatic department, but it's my eyes reading it and my mind hearing it and me telling myself I'm shit for even thinking I can make this a meaningful book.

What saves me is how I've been able to rework other sections into something I'm proud of. Like I have in other books. Curt's walk home after agreeing to the bet in How To Rape A Straight Guy...and the aftermath after he's committed murder. Devlin's breakdown once he connects with one of the killer's victims in Underground Guy. Jake's revelation of who the killer is in The Vanishing of Owen Taylor. I even think the suicide and its aftermath in Bobby Carapisi is me at my best. I would change nothing in it. 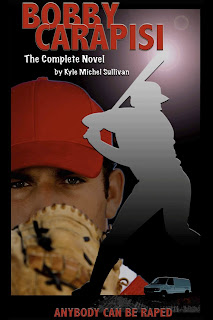 Bobby Carapisi. That was not an easy book to write, but I'm proud of it. I let Eric, the main character, turn into a complete asshole after going through a horrific rape and lash out at everyone over it, even those who supported him. Then he realizes his actions have set in motion the destruction of another victim's life and tries to stop the inevitable outcome. But it's from that point that he begins to rebuild, accepts his part in the disaster, and fights to become a human being, again. He even winds up understanding why one of the men who raped him did it.

This is a long book...about 160K in words...but it has a deeper meaning for me than anything else I've written.

I don't like the cover, anymore. It's not bad...it's just not as good as I'd like. Once I'm done with APoS I may look into updating it.