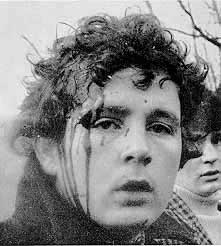 This is a photo of one of the People's Democracy marchers, who were attacked by Loyalists at Burntollet Bridge during their walk from Belfast to Derry. I use this as the image of Brendan while I'm writing.

I'm at a stretch of time in his life where I didn't know what was happening with him, so I've been researching this blank period from the night after the attack to 14 August, when the Apprentice Boys hold their annual march to celebrate the siege of Derry. In 1688, 13 apprentice boys defied the authorities and closed the gates of the city's walls against the forces of James II, initiating the siege...but it didn't really start till months afterwards, then continued over 100 days.

A lot of busy stuff occurs through this time -- pushing and shoving from both sides, demonstrations, a snowy winter, and life as usual. Brendan's in the middle of it all. He turns 13 while still living on Nailors Row then gets moved to a new apartment on Clíodhna Place, near the Rossville Flats. His sister, Mairead, gets married, he's still doing his thing fixing small items for people, going to school, all that stuff. But it's all in the midst of history getting ready to be made, in spades...and I needed to remind myself of the steps in the build-up.

I have the battle, itself, written as well as the Celebration Fleadh, after, so this is just making sure the parts connect correctly...well, correctly enough to work on more, later. My first drafts are always just the beginning of the serious writing.

I also found a couple books at shops in Derry and London that I needed. Those are en route but not expected for some time.

Forward movement...even if it is slow and barely steady...