Rearranging deck chairs on a cruise ship in the middle of a storm... 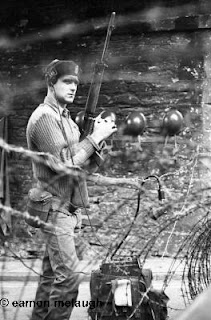 I'm at the point in APoS where I'm going to be shifting sections to better suit the flow and telling of the story. I'm up to Brendan's 14th birthday, and the shit is about to hit the fan. Things have been good between the Army and Catholics for months, but the Protestant leadership was behind the scenes making trouble and insinuating things that weren't true in order to bring the Army into their fold. Which they succeeded in doing, setting the stage for a conflict that really hasn't been settled, yet. 50 years and they're still arguing and fighting, albeit on a much smaller, quieter scale and with far fewer deaths.

I almost went back to Derry for the 50 year commemoration of the beginning of the Troubles.  It was started by a stupid, arrogant, bullying parade put on by the Orange Order back 0n 12 August, 1969. Protestants were so used to Catholics taking their abuse and condescension, they couldn't believe anything would be any different, that year. Here's how CAIN (Conflict Archive of the Internet) described the lead up to it:

The Civil Rights Campaign that started in the mid-1960s began in the 'pressure group' activities of mainly middle-class Catholics who published leaflets, issued statements and sent letters in the hope of addressing perceived discrimination, in many walks of life, against the Catholic community. The membership and tactics of the Civil Rights Movement was to change over the course of several years. It was to become a more broadly based organisation and was to adopt public protest on the street as the main means of achieving the movement's aims.

Unionists, however, viewed the developments with deep suspicion and in many instances their reaction was openly hostile. Many Unionists believed that the Irish Republican Army (IRA) was behind the agitation** and accused those involved of being more interested in undermining the Northern Ireland state than in reform.

The civil unrest, the rioting that often accompanied street protests, the confrontation between the Royal Ulster Constabulary (RUC) and sections of the Catholic community, and the destruction of property, were all viewed by the Protestant community as direct attacks on the fabric of the Northern Ireland state.

The first reforms and policy initiatives were announced towards the end of 1968 and the following years saw a number of provisions introduced to address allegations of discrimination and malpractice on the part of public agencies and government departments in Northern Ireland. Some of the reforms involved merely a change in legislation and quickly achieved the desired effect, such as those reforms related to universal adult suffrage in local government elections. Other reforms have proved more problematic and appear to have had less of an impact, for example, despite several pieces of legislation aimed at achieving fair employment, the level of Catholic male unemployment has remained much higher than the Protestant level.

The series of reforms were opposed by a large section of unionist opinion, indeed the issue of reform was to see the fragmentation of the Unionist Party which had ruled Northern Ireland for 50 years. There was also violent opposition in working-class Protestant areas to some of the measures.

**This was proven to not be the case; at this point the IRA was pretty dysfunctional and began splintering into sub groups like the Official IRA and the Provisional IRA.

So the Parades came. Riots happened. The Battle of Bogside exploded, driving the Royal Ulster Constabulary out of the area. And in came the Army to act as peacekeepers...until they reverted to their old ways and screwed the whole thing up like they had a hundred times before.

What's scary is how similar events are happening in the US today...