August 20, 2019
I've spent three days working on an older draft of the book's first section. I kept thinking I'd changed this and adjusted that as I was going along, but it didn't sink in till this morning, when I finally noticed the date another version was saved -- April 2019 -- and realized my error. Now I'm going through and cross-referencing to see if any of the changes made recently work better than what I'd done in April. So far...only a couple have.

The opening was a lot smoother in the April version. I'd cut out a lot of hyperbole and chatter by focusing almost exclusively on Brendan's father's murder. So all I wound up doing this time was expanding a little, here and there. I still have more to go through, and it's still too simplistic a telling of the story (I do way too much telling instead of letting the characters live it), but there needs to be some background in order to set everything up. Once this draft is done, the next draft will be to determine just how much telling needs to remain. 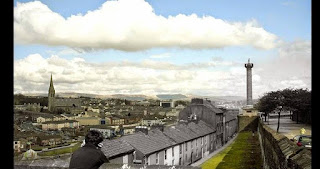 This is an image of Nailors Row, where Brendan lives until April 1969, blended with a current photo of the area...sort of. The area is now a grass-covered hill rolling down to Lecky Road, where the Free Derry building is (which can be seen in the lower left corner). 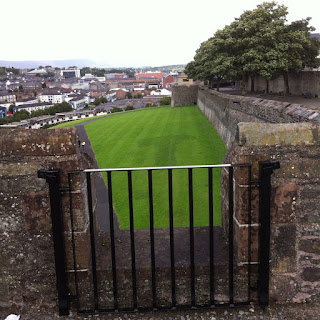 This is how it looks, now. All the houses were destroyed by the early 70s. I came close to hopping a plane to go back and do a quick reconnoiter...but the timing's not right. I'd have to leave tomorrow to catch a flight to Dublin from Toronto then bus it up to Derry and I'd only have a day to do anything before having to head back; I have two doctor's appointments on Monday. I'll look into going later...maybe around Christmas and New Year's. Less stress.

What's interesting is how working on this book has made it hard for me to go to sleep, at night. Normally, I hit the pillow and I'm gone in minutes. But the last few nights I've wound up having to read something else to shift my mind away from Brendan's life. My brain is till sorting through the details and here's too much I need to know about it, still.

I've figured out what schools he'll be going to -- Christian Brothers, then St. Columb's College for his 11-plus. John Hume, who became a leading Catholic politician for Derry, taught there. I'll also be having Brendan's older brother, Eamonn, in the classes ahead of him, aiming for Queen's College...and thinking about it...he can brief Brendan on how to pass the tests so demanded by the Brothers, there. Do it without getting walloped much; apparently the Brothers teaching the classes loved to beat on the boys.

That says a lot about the Catholic Church, right there.