Almost back on track...

August 23, 2019
I found some inconsistencies and an error in what I'd written...like having the confrontations during a march in Antrim a year earlier than it happened; got to be careful about that. But that's why I keep going over my work...and over it and over it and over it...

I also found a section where my timing needed to be changed for it to work better. It's when Brendan goes to Grianan Aileach (a circle fort just across the border in the Republic) for the first time. Granted, these are things I should be doing after I'm finished the first full draft, but it's best if I handle them when I see them because I've got so many notes everywhere, I'll lose track. 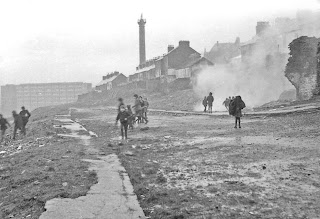 This is another view of Nailors Row, from behind, probably about 1969. St. Columbs Wells, a road with centuries of history to it, is being cut off and traffic shifted into Fahan Street, out of sight down the bottom of the hill to the left.

The backs of the houses atop the hill play into a chapter, where Brendan is caught in the rear garden by Royal Ulster Constables and beaten, on October 5, 1968, as they trash his home. I may be overstating the amount of damage done on that day...but it works for dramatic purposes and I get no pushback from any of the characters.

This hasn't been a good day to do a lot of writing because I ate something that is not agreeing with me and Imodium is barely beginning to work after two doses. I was dumb and bought a ready-made salad, and even though I washed it and used vinegar in it, an hour after eating it I'm having trouble.

That's what I get for trying to eat healthy.